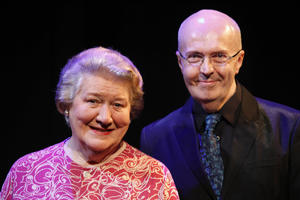 One of the best kept secrets in show business is that Patricia Routledge, known for TV comedy roles like Hyacinth Bucket, trained not only as an actress but also as a singer. She enjoyed huge success in musical theatre on both sides of the Atlantic, winning a Tony for her Broadway performance in Darling of the Day and a Laurence Olivier Award for her West End role in Leonard Bernstein’s Candide.

Edward Seckerson is a prolific broadcaster, writer, and journalist as well as a self-confessed ‘musical theatre obsessive’, Edward has interviewed everyone from Bernstein to Liza Minnelli, Paul McCartney to Pavarotti, Julie Andrews to Andrew Lloyd Webber. He wrote and presented the long-running BBC Radio 3 series Stage & Screen. He also regularly produces podcast interviews with notable theatrical artists and makes regular appearances on the BBC Radio 2 Arts Show, BBC Radio 3 and Radio 4, where he presented the 2007 series of the music quiz Counterpoint. He has published books on Gustav Mahler and the conductor Michael Tilson Thomas, is a regular critic for Gramophone Magazine and Opern Welt, and a founder member of The Arts Desk.

In this fascinating encounter with Edward Seckerson, Dame Patricia recalls her career with access to some rare and treasured recordings.