The golden rose named after Leah Tutu the "repeat-flowering mensch" 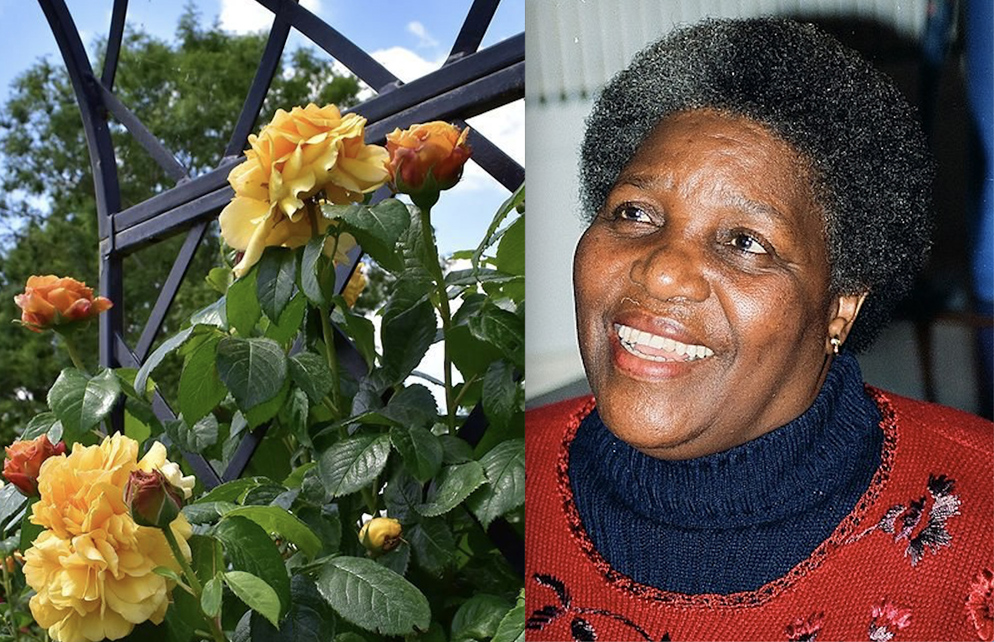 Leah Tutu and the rose that was named after her

It was William Shakespeare who wrote “A rose by any other name would smell as sweet”. Well almost. As anyone who has read or seen Romeo and Juliet will know those aren’t the exact words that flowed from the Bard’s quill.
But never mind, the sentiment rings true and seems to fit very neatly with the fact that a highly popular rose is one named after none other than Mrs Leah Tutu.
The beautiful modern shrub rose 'Leah Tutu' is a floribunda with large golden-yellow, almost Dahlia like blooms that contrasts strikingly with its rich green foliage.
It’s been around a while and was introduced to the RHS Hampton Court Palace Flower Show back in 2009. It was of course specially named after  the wife of Archbishop Desmond Tutu who incidentally had a red rose named after him at the same illustrious horticultural event. What a lovely tribute to a very special couple!

Interestingly the rose which is ideal for pots, containers or just to  plant in a border, came under focus in October last year when the Desmond and Leah Tutu Foundation paid tribute to Leah Tutu on the occasion if her 87th birthday.
The foundation wrote at the time: “Among the attributes Mrs Nomalizo Leah Tutu shares with the gorgeous yellowy-orange shrub rose named in her honour is repeat-flowering. Mrs Tutu celebrates her birthday today, a week after Archbishop Emeritus Desmond Tutu turned 89. She has been brightening his life since her schooldays, and they have been married for 65 years. “Nomalizo”, as she is known to her circle of close friends in Soweto, has been the Archbishop’s great enabler. She has enabled him in a myriad of ways to perform his ministry of courageous healing. She provided the comforting sanctuary of a family home, took jobs to augment income in tough times – and famously completed a mechanics course so she could do running repairs on the car, leaving him to travel in peace. But she does more than comfort; with a cocktail of quick-wittedness, street smarts, kitchen politics and sharp repartee, she keeps him on his toes. We are all entitled to our wrong opinions,” says the bumper sticker she purchased and displayed on the mantlepiece. Mrs Tutu is a qualified teacher and a nurse. She is also an activist who helped establish South Africa’s first trade union for domestic workers. She is a repeat-flowering mensch…”
If you are interested in acquiring your own Leah Tutu rose, it was bred by Colin Horner and introduced by Peter Beales Classic Roses in Attleborough, Norfolk who still sell it.  Website: www.classicroses.co.uk