Watch the final showing of ‘Cavalier: The Life and Loves of a Royalist Duke’ by Lucy Worsley on Saturday 8th January 2022 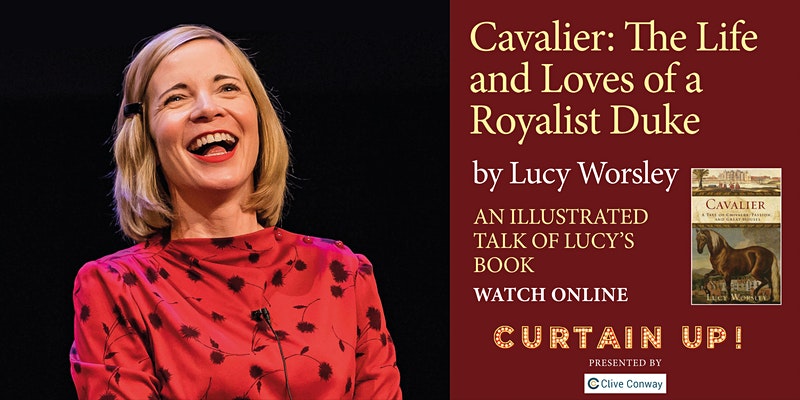 Clive Conway Productions and Iconic Media Solutions present the latest Curtain Up! show ‘Cavalier: The Life and Loves of a Royalist Duke’ by Lucy Worsley on Saturday 8th January 2022.

Lucy Worsley will take you on an illustrated seventeenth-century romp through the life of William Cavendish, first Duke of Newcastle, 1593-1676, grandson of the celebrated Bess of Hardwick, and a lover of horses, women and architecture. The ultimate, romantic and doomed ‘Cavalier’, William had a roller-coaster life: entertaining King Charles I at Bolsover Castle and commissioning some of the seventeenth century’s quirkiest and sexiest British art before riding unsuccessfully into battle in the Civil Wars.

After a lonely exile in Antwerp, he finally returned to England in the company of his second wife Margaret Cavendish, the feminist writer who invented science fiction.  The political tumults of William’s lifetime unfolded against a backdrop of marvellous architecture, especially Bolsover Castle in Derbyshire where where he built a special ‘riding house’ used for teaching his horses how to dance, and where Lucy began her own career as a curator.

VIP tickets include a signed copy of 'Cavalier: The Story of a Seventeenth Century Playboy'.

Lucy Worsley takes you on an illustrated journey through the weird world of the Georgian court by telling the story of her favourite queen, Caroline. Wife of the almost-forgotten King George II, Caroline was the fattest, funniest and cleverest queen ever to sit on the throne. Using eighteenth-century paintings, court memoirs, palace diaries and intimate letters, Lucy recounts the adventures and trials of Caroline’s life at Kensington Palace, explaining the unlikely turn of events that led an orphaned princess from a tiny German state to sit upon the British throne.

The on-demand show can be purchased at: https://cliveconwayproductions.com/pay---courtiers-the-secret-history-of-kensington-palace.html

Lucy Worsley paints a vivid picture of her favourite author, Jane Austen. Through the houses, places and possessions which mattered to her, Lucy takes a fascinating look at Jane Austen’s world, considers what home meant to Jane and to the women like her who populate her novels. Dispelling the myth of the cynical, lonely spinster, Lucy instead offers us a witty, passionate and courageous woman, who, in her quiet way, changed the world.

Your ticket is available for purchase at: https://cliveconwayproductions.com/pay-jane-austen-at-home.html

Queen Victoria, a little old lady, spherical in shape, dressed in black, perpetually grumpy. Right? Historian Lucy Worsley wants to make you think again. Meet a complex, contradictory woman, who had a traumatic childhood, who loved dancing, who suffered calamity and bereavement, before coming out the other side as an eccentric, powerful and a rather magnificent old lady. Lucy's illustrated talk takes you into the life, the palaces, and the rich colourful age of this woman who ruled a quarter of the globe.